N’Golo Kanté is ranked 46th in 90min’s European Player of the Year series.

​Considering his ridiculously high standards, 2019 was not actually a stellar year for indomitable Chelsea and France midfielder N’Golo Kanté – probably the most likeable man in football.

Following Premier League title wins in 2016 and 2017, an FA Cup victory in 2018 and the small matter of a becoming a world champion with Les Bleus later the same summer, a Europa League success is all he could manage in 2019.

Those remarkable consecutive years of success and consistency may finally have taken their toll though, as injuries have become increasingly frequent for the previously ever-present central midfielder.

But of course he was there to start ​Chelsea‘s 4-1 second tier European victory over London rivals ​Arsenal. It has been a year that has strangely seen him develop from the world’s best defensive midfielder into a true all-rounder.

While his 2019/20 has been disrupted so far, it speaks volumes of the man and the player that he is still comfortably within European football’s 50 best players this year. Kanté’s footballing ability is matched only by his humility, and he would take his place is most experts’ ‘world XI’. Throughout 2018/19, Kanté’s position in Maurizio Sarri’s Chelsea side was a hot – and occasionally tiresome – topic for debate. While the Italian insisted on fielding the 28-year-old in a more advanced role than he was used to, every man and his dog remained convinced that Kanté was being played out of position and he and a struggling Chelsea side would be better off if he were operating deeper.

This was perhaps a performance that vindicated Sarri. Kanté picked up not one but two assists for the first time in his career as the Blues romped to a 5-0 success at home to Huddersfield in the ​Premier League. The first was a perfectly weighted flick with the outside of his right boot from the edge of the area into the path of Gonzalo Higuain, who duly lashed home. It was a through ball that most attacking midfielders would be more than content with.

The second – the set-up for another Higuain cracker – was a more routine affair; the Frenchman simply teeing the Argentine up on the edge of the area to curl home. In a typically frustrating Chelsea performance under Sarri against Burnley, Kanté reached a significant landmark and indeed marked the occasion in style. In a frantic start to the game, the midfielder equalised for the Blues just four minutes after his side had fallen behind to an expertly executed Jeff Hendrick volley.

It was a goal made by a typically driving run from Ruben Loftus-Cheek and a typically dazzling dribble from bygone Belgian Eden Hazard. Leaving Matthew Lowton on the floor, Hazard nonchalantly rolled the ball back to Kanté from the byline, who curled the ball beautifully into the roof of the net.

Chelsea would go on to draw the entertaining affair 2-2, but Kanté had marked his 300th club appearance with a fine goal. 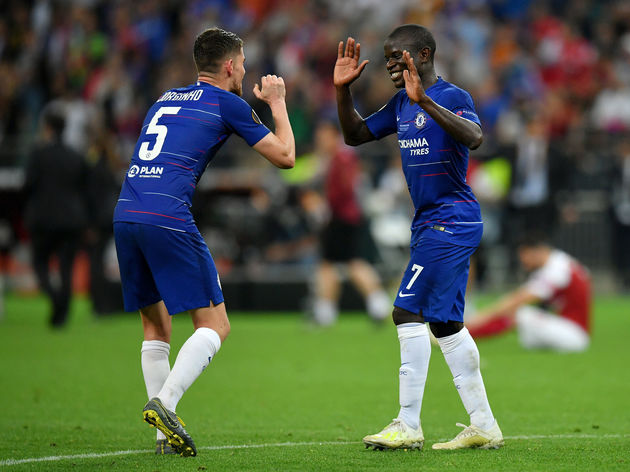 While it does not match the stellar trophies that had preceded it, last season’s Europa League win still represented another piece of silverware in the cabinet of the Kanté household.

The Frenchman started and put in a typically industrious performance as Chelsea ran out convincing winners on a balmy night in Baku. In a box-to-box role, the 28-year-old made tackles, kept his passing short and sharp and got forward at pace as the Blues dominated.

Just the fourth year in a row with at least one trophy for N’Golo Kanté, then. The most recent example of N’Golo Kanté’s newfound attacking prowess came at Stamford Bridge as Chelsea hosted the now seemingly unstoppable Reds. He has scored a lovely goal against Man City since, but this one was just better.

It speaks volumes that the critics have been muted regarding Lampard’s persistence with Sarri’s positioning of Kanté further up the pitch, and the number seven’s fine individual goal was perhaps an example of why. It was also the continuation of his knack of scoring in the biggest games following strikes against Man City and Man Utd.

Picking up the ball about 30 yards out, Kanté turned fellow brilliant defensive midfielder Fabinho and dribbled between the Brazilian and Jordan Henderson before firing an unstoppable strike beyond Adrian into the top corner. It was one Frank Lampard would have been proud of. In that same fixture, Kanté also demonstrated what he is all about when protecting his own goal as he went toe to toe with one of the world’s biggest attacking threats.

Being one-on-one with Mohamed Salah seems to strike paralysing fear into most defensive players. Apparently, N’Golo Kanté is not one of them. With Salah only needing to beat the last man in order to bear down on goal and inevitably net his nth goal for the Merseysiders, the Egyptian gave it a classic swerve of the hips, only to be matched by the indomitable French international, who somehow readjusted at full pelt to take it off his opponent’s toes.