​Chelsea, Liverpool and Tottenham Hotspur are all understood to be keeping a close eye on Lille forward Victor Osimhen.

The 20-year-old, who joined Lille during the summer from Charleroi in Belgium, has enjoyed a fantastic start to life in France. He has racked up 12 goals and four assists in 23 appearances, and he even managed to get himself on the scoresheet against Chelsea in the Champions League. 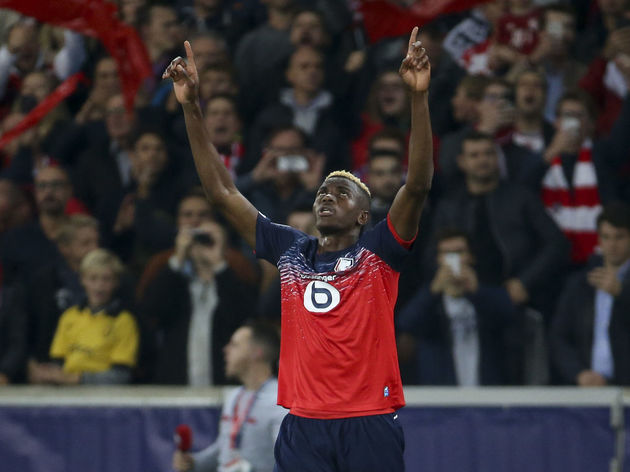 The Nigerian currently sits third in the Ligue 1 scoring charts, and according to ​Sky Sports News, that form has caught the eye of the ​Premier League trio.

All three sides are on the lookout for attacking reinforcements. Beginning with ​Chelsea, they are looking to bring in some competition for Tammy Abraham, and they are considering plenty of names.

90min understands that ​Bordeaux forward Josh Maja has moved into their sights, but the Blues want to keep all their options open.

​Liverpool are eager to add some more depth in attack, although the £7.25m arrival of RB Salzburg’s Takumi Minamino suggests they may have got the job done early.

Finally, ​Spurs want to find someone to cover for ​Harry Kane who, as it stands, is the club’s only senior forward. Young Troy Parrott has featured at times, but there are doubts over whether he would be ready for a long-term role in the side right now.

As a result, Osimhen appears to have emerged as a potential option, but Sky Sports News claim that a January move is incredibly unlikely.

Lille are always happy to sell their top players for the right price, just as they did with Nicolas Pépé’s £72m move to ​Arsenal in the summer, but they would prefer to wait until the summer as they do not want to disrupt their own campaign. However, they may be tempted into doing business if they receive a January offer which is simply too good to turn down.

Such an offer would almost certainly have to be huge. Osimhen is one of the most exciting young strikers around these days, and he remains under contract until 2024, so Lille have no need to sell for cheap.

Given the likely cost of this deal, it would come as a huge surprise to see any of the three sides pursue Osimhen in January, although a summer ​transfer is by no means out of the question.