Third place ​Chelsea welcome second place Manchester City to Kingsmeadow on Sunday in a crucial clash at the summit of the WSL.

The Blues are the only remaining unbeaten side in the league, but were leapfrogged by both City and Arsenal last Sunday after their meeting with Everton was postponed.

Having already beaten Arsenal at home this season, Chelsea will be looking to register another vital win over a title rival and give their hopes of being crowned WSL champions a real boost.

​​They face a ​City side who trail leaders Arsenal on just goal difference, and are mounting a serious title assault of their own.

Nick Cushing’s side have conceded only once in the league this season, and look much sharper going forward since the return of Ellen White.

With this season’s title race looking set to be determined by fine margins, Sunday’s encounter could be pivotal. Here’s 90min’s preview of the top of the table clash. ​Chelsea should have a fully fit and fresh squad, with Emma Hayes spoilt for choice in attack. Ramona Bachmann, Fran Kirby, Erin Cuthbert and Guro Reiten are all jostling for a starting spot behind striker Beth England. How Emma Hayes will keep her wealth of attacking options happy once Sam Kerr arrives in January remains a mystery.

Manchester City are still without Aoife Mannion, who has been ruled out for the rest of the season after rupturing her ACL in October. Forward Janine Beckie has impressed while deputising for Mannion in an unfamiliar fullback role, and will likely continue at right back on Sunday.

Ellie Roebuck will start in goal for City, two years since she was unexpectedly thrust into first team action with a WSL debut, aged just 18, three minutes in at Chelsea.

Laura Coombs returned from injury to make her first league appearance for Man City last weekend against Liverpool, but the ever reliable Jill Scott is expected to replace her for this top of the table clash. 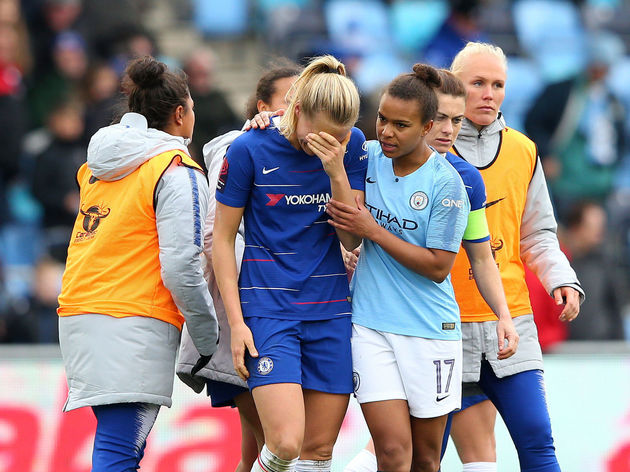 Sunday is the 18th meeting between the pair and it is City who boast the better record, with eight wins to Chelsea’s four.

The two league meetings ended all square last season – with a stalemate at Kingsmeadow in the season opener, and it finished 2-2 at the Academy Stadium. Chelsea and City also met in the semi-finals of both domestic cup competitions last season, with City emerging victorious on both occasions and going on to win the double.

Both sides go into the game on the back of an impressive run of results and in a free scoring scoring mood.

Chelsea won 6-0 at Birmingham in their last WSL outing, with Millie Bright playing the role of a creative continental midfielder, not a sturdy English centre half. Bright played the ball out from the back before marauding up the field and receiving it again inside the Birmingham penalty area and finishing with all the grace of a seasoned striker. She then played a fabulously lofted pass to Beth England, whose touch and finish were similarly exquisite as Chelsea ran riot in the midlands.

Emma Hayes’ side have not dropped points since being held by Brighton during the second weekend of the season.

City go into the game having scored 11 in their previous three league matches. However, they were made to work by a stubborn Liverpool side last weekend, and were fortunate to leave the Academy Stadium with all three points after a late onslaught from the visitors.

Prior to that, City had been irresistible in front of goal, beating both Bristol City and West Ham 5-0. Keira Walsh and Jill Scott were putting chances on a plate for their teammates against Bristol, with a selection of inch perfect through balls just begging to be buried.

Here’s how the two sides have fared in their last five fixtures. Chelsea have a forward line rivalled only by Arsenal in the WSL this season, but this is the stiffest challenge they will face. City set up very rigidly defensively, and there is a reason they have only conceded once all season.

However, Chelsea should have enough quality, especially with the advantage of a bumper home crowd, to edge out City, who have struggled in front of goal against the bigger side.