​A ​Premier League collective points table of the decade has been compiled by ​BBC and as expected, ​Manchester City have come up as the dominant side in England’s top flight.

The ​reigning English champions have amassed an astonishing 812 points in the last 10 years on their way to four Premier League titles.

What’s interesting to note is that ​Manchester United come in second despite their struggles since Sir Alex’s retirement in 2013. 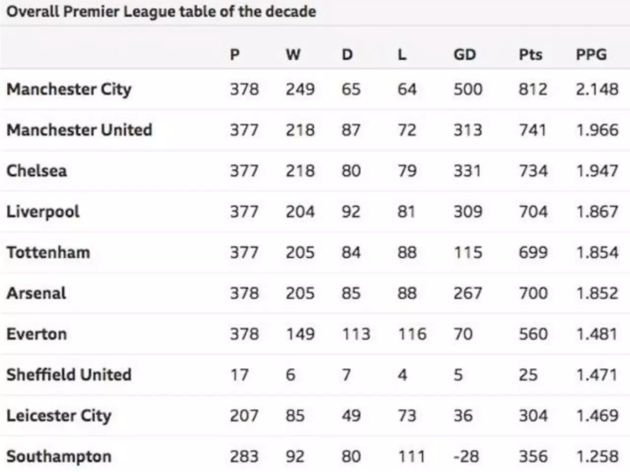 Ofcourse, it comes as no surprise that Manchester City are top of the table when it comes to total points, but what is astonishing is that current Premier League strugglers Manchester United are still second in the rankings, mostly due to the work of Sir Alex Ferguson and his teams before 2013.

The rest of the top four is made up of ​Chelsea and ​Liverpool. Interestingly, Sheffield United also feature in the top half, as their low game total equals a higher points per game average.

Here’s the bottom half of the league table: 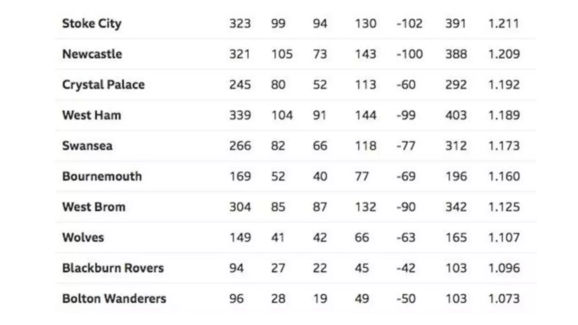 A variety of teams make it to the second half of this overall table. A long-time Premier League fan could never forget the likes of Stoke City, Swansea City, Blackburn Rovers and Bolton Wanderers and the time they enjoyed in the top flight.