​A piece of graffiti has been chalked out at the Paseo de Gracia in the centre of Barcelona, one which shows ​FC Barcelona defender Gerard Pique kissing ​Real Madrid legend Sergio Ramos.

The artwork, inspired by the image of Leonid Brezhnev kissing Erich Honecker on the Berlin Wall, has been painted ​just before the Clasico takes place on Wednesday.

​AS report that graffiti artist Tvboy has been at it again, this time sending a message ahead of Barcelona’s clash with Real Madrid for reconciliation: ‘Spain, kiss and talk’.

He has previously painted similar pieces with ​Lionel Messi and Cristiano Ronaldo, ​Pep Guardiola and Jose Mourinho or Carles Puigdemont and Mariano Rajoy. 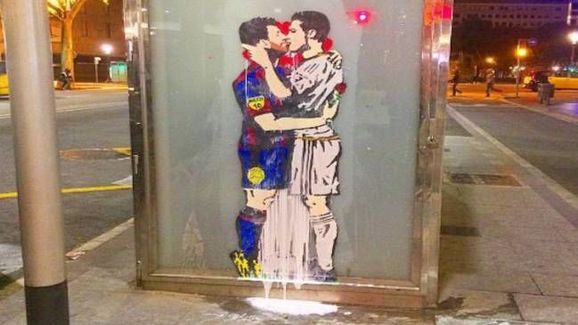 On this occasion, the graffiti artist has used a mixed technique of spray and acrylic on the street, with Ramos and Pique seen as representatives of both Spain and Catalonia, respectively.

Barcelona and Real Madrid were originally expected to play in the Clasico on October 26, 2019. However, Catalonian Independence protests forced RFEF to postpone the fixture. In November, both the teams agreed with LaLiga to play the game on December 18.

Barcelona are leading in the LaLiga points table with 35 points. Real Madrid have the same number of points but are behind on goal difference ahead of this epic clash.